The 2018-2022 UNDAF for Kenya was officially signed and launched by the three UNDAF co-chairs, Cabinet Secretary National Treasury, Cabinet Secretary Devolution, planning and ASALs and the UN Resident Coordinator (RC) on 26th June 2018. The UNDAF was developed and is implemented within the context of Delivering as One, as a collective response of the UN agencies and the Government of Kenya to coherently, effectively and efficiently realize the national development priorities. The Cooperation framework is embedded on the country’s blue print for development, the vision 2030 and national priorities as outlined in the Medium-Term Plan (MTP) III, the Big 4 Agenda and the Sustainable development goals. 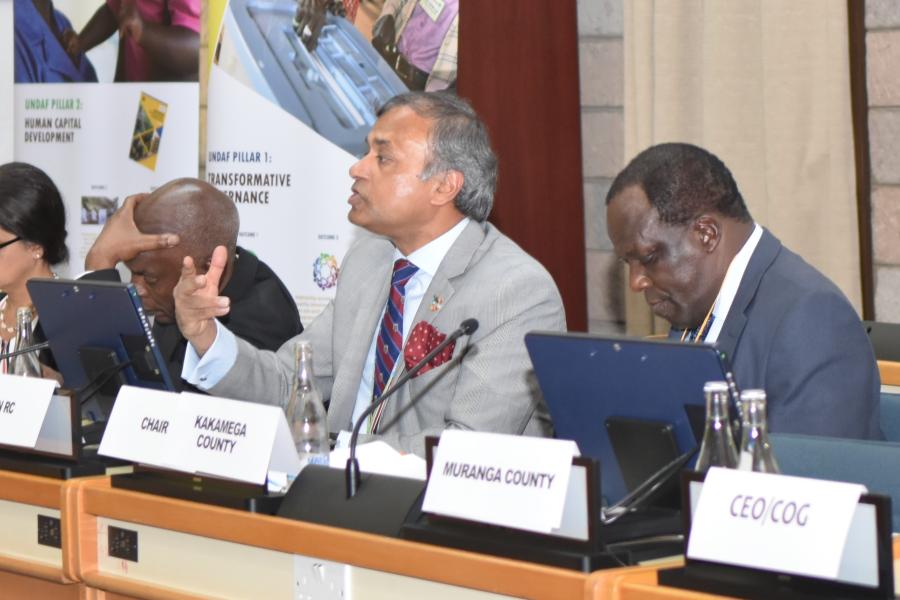 This UNDAF has three Strategic Priority Areas that are aligned to the three MTP III Pillars (Political, Social and Economic) of the Government’s Vision 2030 : 1) Transformational Governance encompassing respect for the rule of law, improved security, and effective implementation of devolution, 2) Human capital development comprised of education ,training and learning, health, Multi-sectoral HIV and AIDS response, access to safe water and sanitation, social protection, gender based violence and violence against children, access to adequate housing and strengthening capacities for addressing disaster and emergencies and 3) Sustainable and inclusive growth focusing on a competitive and sustainable economic growth that is increasingly resilient, green, inclusive, equitable, and creating decent jobs and quality livelihoods for all.

Through this framework, the UN in Kenya will in the coming five years, commit a total of Ksh.197 billion (approximately $1.9 billion) to support the government realize development needs of the country. 58% of the estimate budget (about Ksh.116 billion) will support human capital development contributing to two of the GOK Big Four Agenda, namely housing and universal health coverage. 27% (about Ksh.50 billion) will support sustainable development and growth contributing to the other two agendas of food security and manufacturing. The remaining 15% (about ksh.30 billion) will focus on transformative governance, which is a key enabler of the Big Four Agenda as well as the MTP III.

The UNDAF 2018-2022 is building on innovative approaches, strengths, lessons learnt, and efforts initiated by the UN, National and County Governments, and development partners in Kenya. As such, the new UNDAF speaks to and intend to advance the UN Secretary General’s agenda on repositioning the UN system. Regarding strategic change and reforms, the new UNDAF will make even greater strides towards, expanding public private partnerships for SDG realization; deepen integrated programming, supporting counties and bordering countries going to the furthest first, to enhance the roots of cohesion and socio-economic transformation.

The UNDAF results and common budgetary framework, bringing all UN agencies in Kenya to Deliver as One (DaO) responds to the UN Secretary Generals call for optimizing resources and improving the effectiveness of the UN’s response to countries and regions. The UNDAF integrates the global programming principles and approaches of: leave no one behind; human rights, gender equality and women’s empowerment; sustainability and resilience; and accountability towards realization of SDGs. This UNDAF will strategize social inclusion as a principle to address inequality and socio-cultural discrimination, which are perceived as some of the root causes of exclusion and vulnerability in the country.

Siddharth Chatterjee, UN Resident Coordinator to Kenya, lauded the Government of Kenya for its leadership at both national as well as county level and underscored the meeting demonstrated the strong partnership between the UN Kenya Country Team and Kenya’s County Governments for the implementation of the Sustainable Development Goals agenda in Kenya in order to leave no-one-behind. The Resident Coordinator highlighted that over the period 2018 – 2019 the UN had provided US $205 million catalytic support towards UNDAF programming in support of Kenya’s Big Four agenda and the achievement of Kenya’s Vision2030

H.E Wycliffe Oparanya, Chairman of the Council of Governors, and Governor of Kakamega, shared his deep appreciation for Kenya’s long-standing partnership with the UN, and encouraged the UN to continue to advance its programming at County and grassroots levels in order to address the root causes holding back Kenya’s social economic development.

The Governors expressed their deep appreciation for the continued support from the UN Agencies and encouraged the need to deepen the engagement with all counties.

The forum acknowledged the need for stronger engagement with County Governments moving forward through a well-structured framework for engagement to ensure better coordination and improve impact.