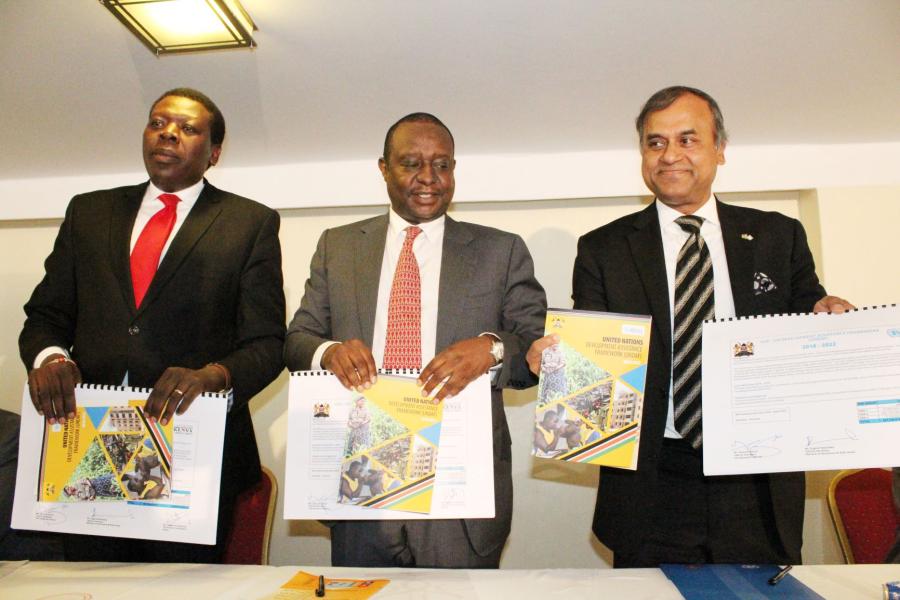 The Government of Kenya and the United Nations has agreed on the next phase of the UN Development Assistant Framework (UNDAF) 2018-2022. In this new collaboration, the UN in Kenya has pledged to increase resources to a tune of USD $ 1.9 billion, from USD $1.2 billion previously allocated to the just concluded UNDAF 2014-2018. The new UNDAF 2018-22 was jointly signed on 27th June 2018,  by the Cabinet Secretary for National Treasury and Ministry of Planning, Mr. Henry Rotich, Cabinet Secretary for Ministry of Devolution and Arid and Semi-Arid (ASAL) Areas, Mr. Eugene Wamalwa and the UN Resident Representative, Mr. Siddharth Chatterjee.

The UNDAF will focus on supporting the government’s development agenda and priorities; strategically on the following; Transformative Governance, Human Capital Development and Sustainable Development – with tangible impact projects across 14 outcomes.

The new UNDAF which has been highlighted by the UN Secretary General, António Guterres as one of the new-generation UNDAFs, strategically provides collective programmatic support and a comparative advantage to the Kenya’s development priorities; as it is aligned to President Kenyatta’s ‘Big 4 Agenda’ development agenda (housing, health, employment and manufacturing), the UN reforms agenda recently approved by member states; and, the SDGs. The UNDAF was developed in an inclusive and participatory manner, with over 100 institutions involved in the discussions and review of the document. The intensive consultations involved participants from national and sub-national levels, including line ministries, state and non-state agencies, private sector and civil society, with the UN Country Team putting aside their individual mandates to make sure that the government priorities are echoed in a way that the framework envisions its’ support towards the delivery of the new Mid-term Plan III, the Big 4 Agenda, theVision 2030 in a spirit to ‘Leave No one Behind’ At the core of the implementation strategy will be the Delivering as One, in line with the UN reforms, as a deliberate focus to entrench coherence in approach, messaging and impact of all UN agencies in Kenya, while leveraging on available resources for effectiveness towards the realisation of inclusive, equitable and sustainable human and economic development. “Agenda 2030, with its 17 Sustainable Development Goals is an ambitious global undertaking, and the Government appreciates the partnership with the UN in Kenya as we focus on promoting inclusive growth and sustainable management of natural resources in the next five years,” said CS Henry Rotich. UN Resident Coordinator Mr Siddharth Chatterjee noted that the rolling out of devolution, with its mission of progressive distribution of resources towards reaching the farthest first, set Kenya ahead in the SDG clarion call of Leaving No One Behind. “This UNDAF is a commitment from the UN in Kenya to not only to replace fragmentation with cohesion within the UN system, but also to support the Government in its pledge to move those at the periphery to the centre, in order to achieve progress for all Kenyans,” said Mr. Chatterjee, UN Resident Coordinator to Kenya. The Resident Coordinator added that, all the outcomes in this UNDAF, whose achievements will be evaluated every year, are designed to be strategic enablers and the UN in Kenya has its sleeves rolled up to support initiatives that will ensure that Kenyan families are protected from crippling medicare bills, that no Kenyan goes to bed hungry, there is access to affordable homes and manufacturing sector is expanded to provide more jobs for the youth.