Your Excellency Mr. Antonio Guterres, Secretary-General of the United Nations,

I welcome you all to Nairobi and to this Conference. Today, we further exchange ideas on how we can be more effective in counter-terrorism, and in the prevention of radicalization and extremism that breeds terrorism.

I wish to thank His Excellency Secretary General Guterres for co-chairing this Conference with me. Your presence is a clear signal of the high priority you and the United Nations place on this agenda.

I also thank His Excellency Moussa Faki, Chairperson of the African Union Commission, for being here. I hope that strong and practical proposals emerge in the next two days on how the AU's Peace and Security Architecture can be strengthened to be more responsive to the terrorism challenges facing this continent.

To all the distinguished participants present, I urge you to utilize the opportunities afforded by this Conference to advocate for greater investment and reforms towards combating terrorism.

I ask you all to join me in a round of applause dedicated to all those who put their lives at risk every day to combat terrorism and keep our lives and freedoms secure; and also to all those who are brave and outspoken champions against radicalization and extremism, piercing hearts with truth, despite the dangers to themselves and their loved ones.

Thank You. Let us also pause for a minute of silence, to remember all those taken from us at the hands of terrorists and extremists. For their sake, and to ensure that they are the last victims of such atrocities, we hold Conferences such as these.

As with the rest of the world, Africa has suffered greatly at the hands of global terrorism.

Terrorist groups, and in particular Al Qaeda's affiliates, splinter groups, and those it has inspired; have an active presence in Africa, taking territory, disrupting the Rule of Law and the enjoyment of Freedoms, and in some cases even posing existential threats to the Nation-State.

Groups like Al Shabaab and Boko Haram have started showing that they are a cancer that starts in one region of one country and steadily grows from there, eventually having negative affects across not just that country but neighbouring ones within the region.

Given this tendency for terror groups to spread their nefarious tentacles across borders, and given their stated goal of continent-wide oppression and subjugation, no African nation can rest easy and we are all targets in the sights of Terror Groups.

Terror groups have mutated and evolved. They now feature sophisticated public relations arms, covering their extremism and atrocities under the veneer of operating as quasi-governments and providing public goods akin to those provided by the State.

They do this not for the benefit of the people subjugated under their tyrannous rule, but as a means of creating a false-equivalency and respectability to their criminality.

We cannot cede ground to such groups if we hope to build a prosperous and peaceful Africa where freedom and justice reign supreme.

A strong State; bold and adequately resourced to combat terrorism and extremism in a way that at all times upholds the fundamental values of our democracies, is a prerequisite for security, development and deepening democracy within the nation.

The continued ability of terror groups to radicalize, recruit and train our young people and thereafter deploy them to commit unspeakable horrors, is a wake-up call for all of us, both State and Non-State actors, both domestically and internationally.

International bodies, individual governments, civil society, the media, the religious sector and all relevant stakeholders must come together, act in concert and ensure that we channel the immense talents, energy and vigour of our youth to the betterment of the world and to advance the quest for the human race.

We need to respond to the profound threat of terrorism with a mix of capabilities and frameworks that are informed by lessons learned and driven with much greater urgency and determination.

The most important immediate goal is to ensure that Al Qaeda and ISIS affiliates and surrogates do not hold any territory in Africa. Holding territory is their single greatest source of financing, recruits, training grounds, and claims of legitimacy. They exploit investment, trade and humanitarian spaces to sustain their evil campaigns. The results of this reverse development, has increased the phenomenon of internally displaced persons, and contributes to general social and political instability in States, Nations and Regions.

The hard lesson we have learned is that multi-national military missions that deny terrorists territory need to have strong mandates, appropriate force enablers and multipliers, be deployed alongside a comprehensive terrorism sanctions regime, and implemented together with a political strategy for stabilization and the delivery of services to the population if they are to be successful.

These necessary measures require extensive support in terms of funding, logistics, legal frameworks and multilateral cooperation but are more than worth it when one considers the countless lives saved, dignities protected and the protection of economies and fundamental values that result from such investment.

We cannot just react to terrorist acts, we must do more to prevent incitement and recruitment.

Here in Kenya, I am happy to report that we have built a robust prevention response underscored by the development of County Action Plans to Counter and Prevent Violent Extremism which have devolved terrorism prevention to the local level. The 47 county action plans, in our 47 counties, bring together security services, administrators, civil society and citizens to prioritize collective actions that are measurable and time-bound.

Their efforts will be complemented by a Student Safety and Security Mechanism that our Ministry of Education has developed and will start rolling out in the next few months. Its goal is to protect our children from multiple threats to their wellbeing that may make them vulnerable to radicalization. This intervention is in addition to my Government's broad-based enhancements with regard to the quality and access to education as well as to employment and self-enterprise opportunities after education. In tandem, the two go a long way towards denying extremism a fertile ground within which it can take root.

Every Nation in Africa needs to do more to develop and deploy strong disengagement, rehabilitation and reintegration capabilities. Over the last three years, Kenya has prioritized this area by implementing legal and policy tools in addition to working closely with local groups and civil society. Â Already, we have seen positive results from our endeavors, including hundreds of individuals â€” many of them returning terrorist fighters turning away from terrorism and leading the fight to similarly rescue others who remain trapped in throes of extremism.

Terrorism is a Pan-African Threat that requires Pan-African Responses and Solutions. I call on the African Union to generate a powerful political consensus for confronting and defeating Terrorism and all other forms of violent extremism conducive to terrorism. Â As a Continent, we must speak boldly and with one voice, declaring to the enemies of Freedom that we shall not relent and we shall prevail.

I urge this Conference, the African Union and United Nations summits to come, to deliberate on and develop dynamic solutions that deny groups such as Al Qaeda, ISIS, Boko Haram and Al Shabaab a foothold and space to grow within Africa. Â Discussions and Solutions should propose multi-faceted approaches to combating Terrorism, Extremism and Radicalization that confront the vice on the battlefield, in places of worship, in market squares, in our schools and in our homes.

Internal capacity of African States must be enhanced, and cross-border and multilateral efforts geared-up. Â In that regard, the African Union's Peace and Security Architecture can respond to these needs by receiving input and guidance from member Heads of State and Government. I trust that the commitment shown by the United Nations and in particular Secretary General Guterres will translate to measures that enable the AU advance our continental fight against Terrorism.

We have the means and resolve to win this fight; our people demand we take the urgent steps that are required for victory: the victory that will exemplify the goodness of humanity. Kenya will stand alongside all of you in this mission.

I thank you for the work you do every day to make the world safer and better, and I wish you all a productive Conference and an enjoyable stay in Nairobi and Kenya as a whole. 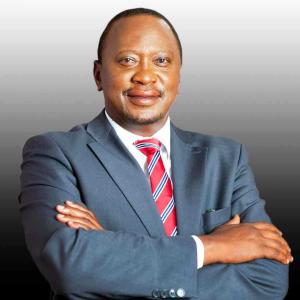 President of the Republic of Kenya

UN entities involved in this initiative