Eulid Kipchoge Honoured as UN Person of the Year 2018

NAIROBI, Kenya - World Marathon record holder Eliud Kipchoge was today honoured as the UN Person of the Year 2018, with the UN body paying tribute to his promotion of the values of hard work and discipline among an increasingly disillusioned youth.

Widely acknowledged as arguably the greatest marathoner of all time, Mr. Kipchoge recently smashed the world record in by 1 minute 18 seconds, but it is his constant message of hope in a nation of a predominantly youthful population faced by challenges such as unemployment and lack of role models that moved the UN in Kenya to make him the 16th recipient of the Award.

“I believe Mr. Kipchoge deserves this Award not just for his achievements on the marathon course, but because he has consistently sent out the message that with dauntless persistence, human beings have no limit to what they can achieve,” said Cabinet Secretary Amb. Monica Juma, who was the Chief Guest at the presentation ceremony held at the UN compound in Gigiri.

In celebration of the United Nations Day which has been observed on 24 October, the UN in Kenya has awarded and recognized individuals who best represent the ideals of the world body every year since 2002.

Amb. Juma said that young Kenyans form the largest segment of the population, but they are growing up in tough circumstances, which the Government and the UN are addressing through the current UN Development Assistance (UNDAF 2018-2022).   “When the youth go about seeing the dark side of things, our future as a nation is equally grim,” she said.

The UN Kenya Resident Coordinator Mr. Siddharth Chatterjee said that Eliud Kipchoge was chosen for bringing out in an inspirational way the UN’s commitment to exploiting the power of sport in achieving the global sustainable development goals. 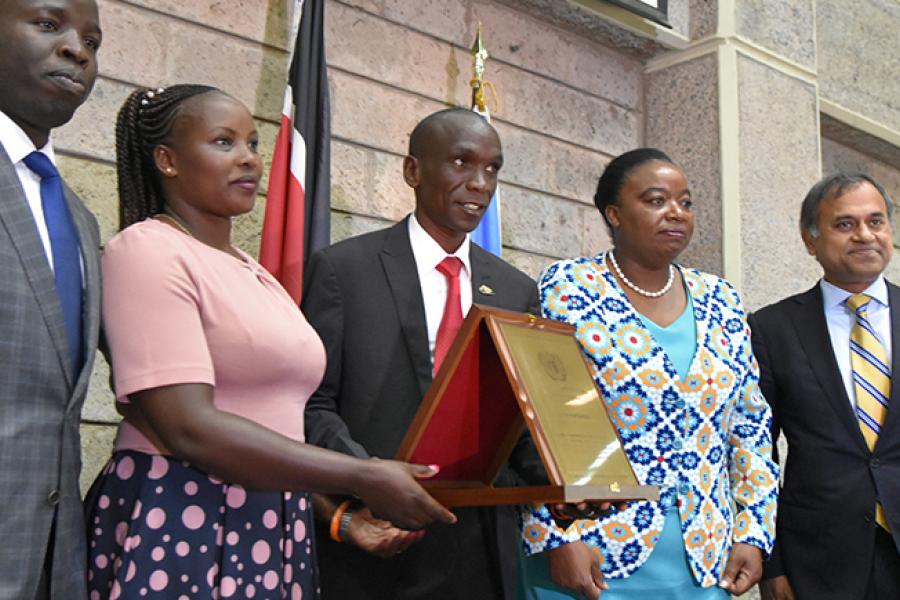 “In a continent where young people feel that very little is going for them, this message of hope, backed by the testimony of a phenomenal rise through sheer grit, could not find stronger expression than through Mr. Eliud Kipchoge,” said Mr. Chatterjee.

“We believe that by tracing his achievements and the single-minded pursuit of his dreams, young people in Kenya today will be able to look into the future, see beyond the obstacles and decide that better times are within their grasp,” he said while congratulating Mr. Kipchoge for the Award.

Accepting the Award, Mr. Kipchoge warned the youth against the temptation of expecting a big break that will set them on the path of fame and fortune.

“It takes extreme effort and many years to reduce one’s time even by five seconds when running.  Lasting achievements are based on small increments in doing the right thing,” said the champion, who has won all but one of his races since he started running the marathon.

The Person of the Year Award was last year won by Ms Umra Omar of Safari Doctors, who was recognized for her work in delivering primary healthcare to marginalized communities in her home County of Lamu.

Other past recipients include First Lady Margaret Kenyatta for her Beyond Zero Campaign and three-time World Half-Marathon champion. Tegla Loroupe for peace-building programmes in conflict zones.

Author
Mr. Nasser Ega-Musa
UNIC
Country Director
N.Ega-Musa@unon.org
Mr. Ega-Musa is an experienced communication and policy leader. During his career, he has had the opportunity to advise and work with the following world leaders: President Jimmy Carter, Koffi Anana, President Sahle-Wok Zewde (Ethiopia), President Olusegun Obassanjo (Nigeria), President Benjamin Mkapa (Tanzania) and Graca Michel (South Africa). Some of the key initiatives he has worked on include peace negations in Kenya after the 2008 political crisis as well as the Democratic Republic of Congo peace talks. In the private sector he helped Reebok develop an international corporate responsibility strategy. He has also worked for the United Nations and World Bank. During Mr. Ega-Musa’s long career, he has built, in Africa and the Middle East, a strong network of Government Officials, Diplomats, Aid Organizations, Journalists and Media Houses. He was educated at Wesleyan University and Fletcher School of Law & Diplomacy. He has a masters degree from Fletcher School of Law & Diplomacy, Medford, MA.